From an order value of €60, shipping is free

From an order value of €60, shipping is free

Save 10% off your first purchase

Sign up today and we'll send you a 10% discount code towards your first purchase. Delivery was quick. You have to try a little, there are enough washers. Fishing is now even easier to handle and the whole thing looks chic at the same time. Fits perfectly for my Tatula 103 Great stock and very fast delivery. I will install these bearings in an abu 1600c or 2500 and throw them at the senior world championships in casting on Saturday.... Hello Olaf, thank you for your feedback, we wish you the best of luck in the competition! 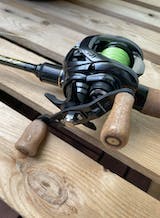 Hey thanks for your feedback, looks really good! Thanks for sharing the picture with us :)

I am completely satisfied with the quality of the goods and would order here again at any time!
Thank you also for the extra that came with my order 👍🏻 Top goods, fast delivery. My Ultegra has become a lot better quality. The knob not only looks good but can also be cranked much better than the original one. Always happy . Fast response and top advice by email. Best regards . 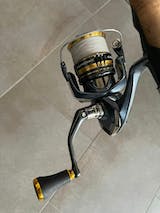 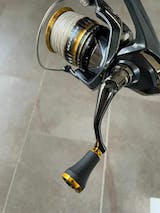 Nice knobs and very handy. Assembly was a bit time consuming. Because of the washers of different strengths, you first have to test which ones fit best without the knob having too much play. Otherwise highly recommended. I got the handle for my Ambassadeur Beast HD and it optically enhances the reel again. I paired it with the 27mm knobs in black.

I sent in two rolls, one was serviced to full satisfaction. The second, which was also not in good condition (2 years of brackish water fishing), was serviced accordingly. However, I had already announced by email that the reel would probably need more than a simple service and that it would be best for us to contact you again when the reel has been inspected. A few parts should have been replaced because it still sounds pretty bad when thrown even after the service. Unfortunately there was no consultation, I would have been quite willing to make more sales and have the reel restored to a good condition. So now I have a reel that runs smoother again, but still sounds worrying when thrown.

Hello David, thank you for your review. We didn't see the need to replace parts on said reel, a thorough cleaning and new lubrication was enough for us here. We couldn't detect any worrisome noises. The gearbox/pinion gear showed no damage and the roller bearing was also fine. All ball bearings have been cleaned and re-oiled. We are sorry that we could not fully satisfy you. 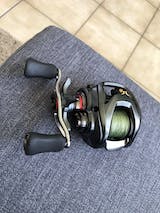 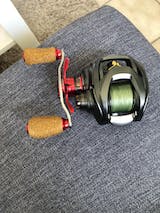 Very fine, light and high-quality oil, let's wait and see what the longevity looks like. The new knob fits perfectly on the new 4000 Vanford, much better feel and look. Now you can also till the water all day long. I am very pleased. Very quick maintenance and ball bearing replacement. Really great! :) I'll send them back to you at the end of the season.

It is particularly worth mentioning that I sent in the roll shortly before and it was still there on time!

great oil If you don't just want the reel to rotate at high speed and want to keep the oil in the bearings a little longer, you will be satisfied with the Medium Oil. The longevity of maintenance and not having to constantly unscrew the reel has its appeal for me now. For some bearings and larger rollers, a light grease might be an option for the bearings. Thanks to Reelaix for importing it to Germany! Fast delivery, great stock, what more could I ask for Since I am an absolute cork fan and value quality, I have tried various knobs of this type for a long time. The knob bought here is very attractive and well made, will certainly find room on some roles. The bearings are as shown in the item description and are well made, do their job

I had sent in my Shimano CC BFS for service and am satisfied in every respect. The e-mail contact was friendly, they answered quickly and informed about the status of the processing. Knobs and knob storage ordered via the shop were installed directly at no extra charge. The return was well packaged. Clear recommendation from me. 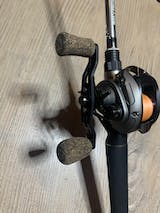